Hello to all,
I know we were absent for several months: not sharing any news or updates about the game or its development. I will try through this thread to walk you through all the development that our studio had during the last months, what we have been doing and the current status of Veterans Online.

Let me start by saying: YES, we are definitely still working on Veterans Online and YES we will be releasing it to the public. The game is still under development, even though we made huge progress and some radical changes.

Also, as an important note to add: Veterans Online will be released by 2018, and you will read more about the causes of the delay below.

Since the start of 2017, we had multiple changes: in-game obviously, within the team and in our environment.

First of all, we now have a new office: a bigger, better, faster… office! The team has been growing for a moment now, and the old office is no longer suitable for us. So now, we work in a new “Villa” that you can see, if you are in Tunis,  when you take the road to La Marsa (we have a giant billboard on top of it, with a big ass cockroach on it).

The bigger space we acquired, will allow us to have more team members, a testing area and different spaces for the administration department.

On the fun side, we now have a big pool, a gym and a sauna, all available for the team to relax when bugs happen (and believe me they happen very often). We also took time to decorate the place: a lot of gaming illustration and items can be found all around the place. 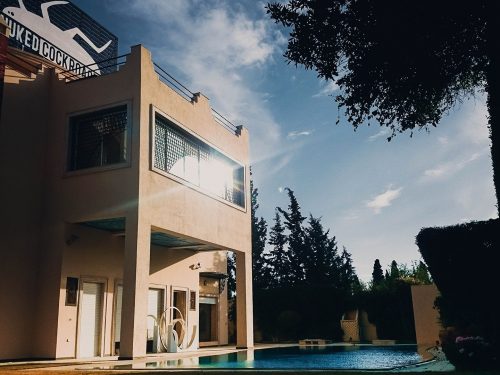 You are welcome to visit anytime to check it up.
On the team side, we are now 31 members: developers, artists & designers, sound engineers and administration. We have just recruited 6 new members: 5 Tunisians and 1 Russian developer. This was needed to insure the correct development pace that we require to achieve our milestones. You can visit our website and discover the faces of all the team in the “about us” section.

Startup & company side: we have been busy with a lot of stuff: I am sure that you heard of this if you are following the entrepreneurship scene in Tunis: we raised 1.5 million tunisian dinars as our fifth round of fundraising. This was the money that allowed us to make the changes for the office and recruit the new team members.

Not only that, but also, it allowed us to open our new development unit in Lyon, France: Polysmart France will be our window on the International market for talent recruitment, business opportunities and rapid scaling that we want for our game. All the paperwork was done, and it will start operating starting this December.

On the same note, we have been visiting different events worldwide for networking and partnerships building: we were in Istanbul where we participated at the Istanbul Startup Competition: we reached the final 25 startups from a total of 100. We also were present at Paris Games Week and Games Connection Europe: both happened in the same period in Paris.

Veteran Online Now to the important part that I imagine you want to read about more than anything else.

Veterans Online is growing and expanding even more than we expected. Since the last Closed BETA period that we had (last year), and thanks to the feedback that we collected from you guys, the game had some major changes. 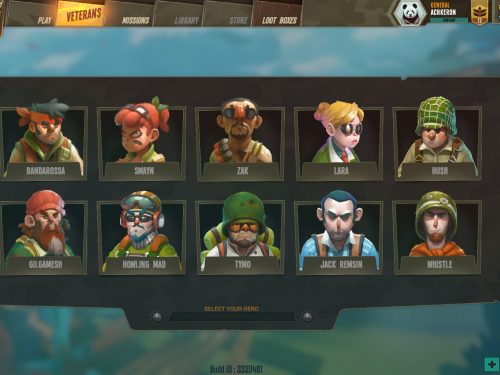 First, we now have 10 playable characters, each one of them is unique and offers a different play-style than the others. We now, have ultimates implemented in the game: each character will have a unique ultimate than can be casted during the match: it is a powerful ability that can get you out of tough situations, or getting a mayhem of kills.

And of course, we know that you will need skins to brag with in-game. That is why, you now have the possibility to choose which skin you want for each character. You will have a big variety of skins related to the character past, or some interesting ideas that we have for you.

You may also ask; how do you get these skins? right? Well, we did not reinvent the wheel for this: you will be winning loot chests after each game or so. We now have 3 different types of “chests”: 2 normal chests that award you different items (including skins) and 1 changing room that guarantees that you have an epic skin.

These characters belong to two main factions; Company and Empire. They represent the main two parts of the war happening in the battlefields of Veterans Online. You will discover more about them in the next couple of months.

A new system was implemented in the game: the badges system. Now you have the possibility to choose different badges that will affect how you play your character. You will own a deck with 6 badge slots: 5 generic and 1 specific to the character. Depending on your play-style, you can pick which badges to load during your game. 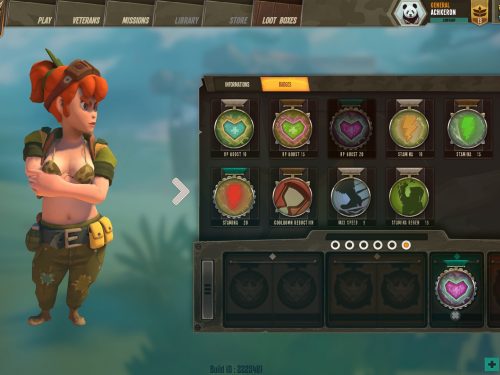 New UI, new menu and new improved art were all implemented in the game. We took time to enhance the visual art of the characters and the elements of the environment: now they look sharper, cleaner and honestly more sexy. We also, expanded some maps by adding new areas decorated with story related elements: Jibalba now has more monkeys and more gold! 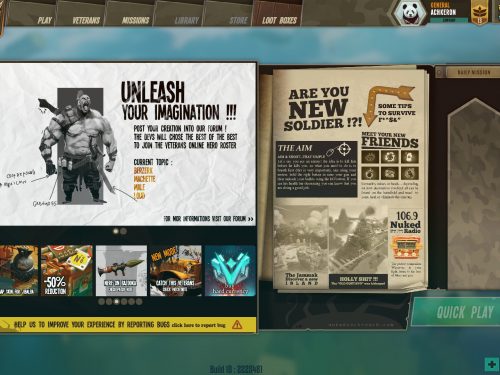 And a lot of other changes that you will discover: Yet, a very small group of you already tested the game. We had a small testing session with 10 members from the gamer community in Tunis. We held the session in our offices, and we had a lot of fun playing and watching people react to the new additions to the game. We will be organizing more and more sessions like these and most probably, we will be posting about them in our Facebook page so you can have the opportunity to join in.

As last words, I want to announce the re-activation of our communication unit. We will be updating you about Veterans Online and Nuked Cockroach daily. For the small period of time remaining, since we are still developing the game, we will try to include you more in our creation process. We will be sharing more art, character backstory and new abilities.

So keep following us for more news, and we thank you so much for your support.